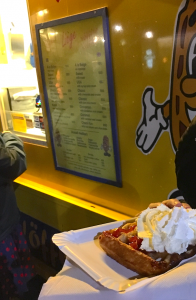 The waffle wagon is alive and well in Reykjavik and it’s called Vöffuvagninn. They aren’t very social media active, however you can find them on Twitter where they haven’t tweeted since 2015. (Yes I know it would be nicer if they tweeted their locations, but where’s the adventure in that?)

It’s the best ever Belgium waffle ever — hands down. Sometimes it’s right outside near Hallgrimskirkja during the day. And on weekend evenings it’s pretty much guaranteed to be at Park Laekjartorg on the main drag near the Gray Line Iceland and just up from Harpa. Finding them outside these two locations might be a little adventure, but find it you must. Their hours? One website claims 11am to 9pm but I found them at Park Laekjartorg much later than 9pm once.

Just look for the bright yellow wagon with an awning and the winking waffle. “Freshly baked Belgian Waffles since 2001.” Don’t miss out. It’s a huge treat eating one in the crisp outdoor air. 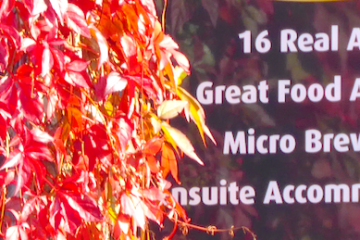 Wandering to Windermere in Cumbria will take you past the little hamlet of Ings. Blink and you might miss it but the Watermill Inn & Brew Pub is a must stop and here’s five quick Read more… 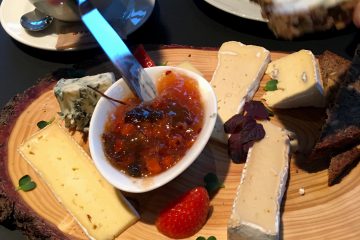 4 Places to Eat in Reykjavik….and 2 Places to Skip

Be prepared to eat well in Iceland, from a 1-star Michelin restaurant in Reykjavik to a little coffee place with pancakes for breakfast on your first day. 1) Many planes arrive in Read more… 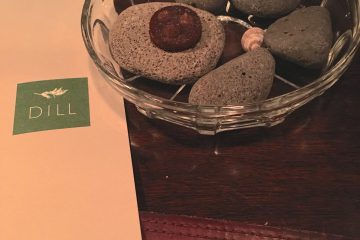 Eat It! Dill in Reykjavik

Dill in Iceland? Yes absolutely. It’s one of my favorite restaurants. I even flew in for a few days just for Thanksgiving dinner for their menu #145. My first ever Dill experience was menu Read more…